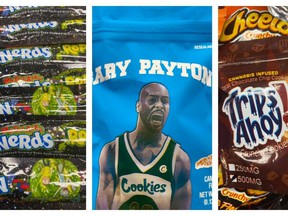 A Tennessee woman has been arrested and is facing charges after police discovered 36 pounds of cannabis-infused candy edibles during a traffic stop in Clinton, Mississippi.

Monet Shields, 31, of Memphis, was stopped for an unspecified traffic violation while driving her 2017 Dodge Challenger in the wee hours of Tuesday morning, Clinton Police Department announced in a Facebook post.

Shields is waiting for the bond to be set.

Clinton police say that the investigation is ongoing, and further arrests of “participating criminals” could be made as a result of the seizure. Officers are also warning residents of the Jackson metro area of the presence of edibles that have been packaged to look similar to classic, non-intoxicating confections such as AirHeads, Warheads, Nerds Rope, Sour Patch Kids, Life Savers, and Chips Ahoy cookies.

Photographs of the cannabis candy packages neatly aligned on