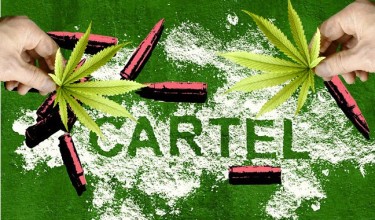 In order for the “War on Drugs” to exist – there must be an enemy.

In the War on Drugs this enemy is the “drug cartel”. This used to be “the mafia” during alcohol prohibition and just like the mafia – drug cartels can be ruthless!

Since Nixon signed that little paper and made drugs public enemy number one – there’s been a relentless tug-o-war between law enforcement and cartels.

The cartels would freight, fly and ship in tons of drugs through the 1954 mile stretch of land that separates the US and Mexico with an imaginary line and surrounding oceans and airspace.

The US government would increase their budget, find new ways to fight back, close up some of the routes and arrest a handful of cartel members.

Then, in the early 2000s, the United States convinced Mexico in Merida to engage with their own “war on drugs” in order to fight the cartels on their home turf. The idea being, the border is impossible to manage – and that going at them would be the best.

The cartels in Mexico were far superior to those in Colombia and have a lot more money. In fact, since the Mexican cartels are the gatekeepers to the US – all other Latin American cartels in one way or another need to pay them tribute to pass the drugs and other contraband.

Needless to say – Mexican Drug Cartels are a Force to be Reckoned with…already having their clutches in hundreds of cities & towns in the US.

This truly is a direct result from the prohibition of drugs – and as long as we continue to keep drugs illegal & restricted to the black market – cartel presence will only grow.

Hell, I’m almost positive there’s at least one Congressperson or Senator on a Cartel Payroll.

If you think the long reach of the cartel is something to be afraid of – wait until you hear what they’ve been up to lately.

You see – the cartel, regardless of what they do – are innovators. Because the full force of the US is against their operations, they have to be creative.

They’ve created Trebuchets to launch drugs over the border wall. They often send submarines, airplanes, swimmers, and whatever else they can do to smuggle their contraband.

But they also build up their weapons cache to defend their territory from the law and from rival gangs. One of the latest developments in cartel warfare is the implementation of weaponized drones.

Check out this excerpt from The Courier Journal talking about a recent bout with Cartels and their weaponry;

“It began as a routine operation: Mexican police were clearing blockades placed by organized crime groups in El Aguaje, a Western Mexico town that has become a battleground for drug cartels.

Suddenly, authorities said, a drone flew over, dropping a gunpowder bomb and wounding two members of the Michoacán state police force in the arms and legs.

The April attack underscored an emerging danger in the international fight against illegal drugs — weaponized drones.”

The Buzz of Death is going to Escalate things…

Can you imagine hearing the buzzing sound of death fly above you and in the next moment – BOOM! Your leg is blown to bits!

Yes, this is exactly what is happening and if we have learned anything from history we would know that if the cartels are doing it – the cops will be doing it soon.

This is my major concern with this “war on drugs” other than the fact that it is a vile violation of our personal rights and makes drugs more dangerous to consumers – but also because it is escalating violence and the innocent bystanders are we.

But how does one stop a monster like the cartel?

It wasn’t too long ago when Mafiosos were running about with Tommy Guns shooting up stores in the middle of the day. What did we do to curb their power?

Oh – legalized their main source of income and focused on their other illegitimate businesses. Slowly but surely Mafia presence – while still a threat in some areas – have become far less of a threat these days.

Hell, they make reality shows about them now!

Can you imagine in a decade or two the “Real Housewives of the Sinaloa Cartel?”

The point is – that via legalization, the main revenue stream of the mafia was severed. While they still made money from running guns, extorting, kidnapping, murder for hire, human trafficking – these industries are far more difficult to conceal.

Did you know that human trafficking is the second largest illicit market in the world following drugs? In other words, people are still a higher commodity than guns in the world!

And we’re still going after people for consuming drugs? How does that make any sense at all!

Irrespective of this – the government is still very adamant about going after the cartels and as a result – their weaponry is escalating.

Soon, you’ll have police drones patrolling the neighborhood, perhaps equipped with fully automatic or some “non-lethal” deterrent like tranquilizer bullets or some other crazy dystopian nightmare scenario.

I understand the need to keep people safe and protected – but when the very policies you are implementing is scaling up this level of warfare in urban areas – you’re actually doing the opposite.

It’s high time that lawmakers begin to take responsibility for the fucked up policies their predecessors have instituted in the name of “morality & safety”.

The Mexican Drug Cartels are ruthless monsters who take no issue with creating chaos and fear in society and they should be stopped!

CARTELS AND WEED, READ THESE…

MEXICO LEGALIZES MARIJUANA, IS THAT GOOD OR BAD FOR THE CARTELS? 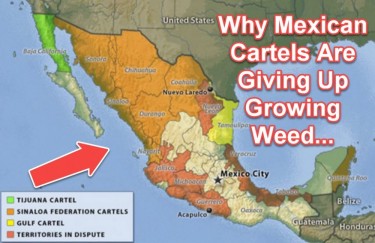 Why Do Republican Lawmakers Want President Biden to Reclassify Cannabis Instead of Removing It from the CSA?