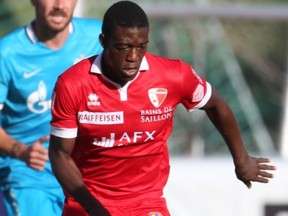 Though technically illegal, cannabis is widely used in Belgium, with small amounts decriminalized since 2003. Individuals may also grow a single plant at home.

A 2015 research paper published in the International Journal of Drug Policy concluded that, given the spread of cannabis cultivation in Belgium, reducing the supply of the drug is not a realistic policy objective.

“Given the limited harms generated, there is scarce scientific justification to prioritize cannabis cultivation in Belgian law enforcement strategies,” the paper concluded.

Bia, 30, played a few seasons at the top level of football, including stints with the Wolverhampton Wanderers and the Watford Football Club, per Sports Joe.

Born in Zaire, Bia’s family moved to Belgium when he was a child. He has represented the country internationally on three occasions, making his first appearance in 2009 with Belgium’s Under-19 national club.