Home The Growth Op Drug smugglers make their presence known with a bang after their pick-up... 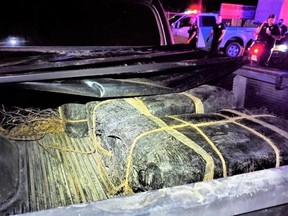 The contraband has since been turned over to the Drug Enforcement Administration and the pick-up truck seized.

It is not known if the occupants of the pick-up were residents of Texas or somewhere else. That said, Texas regularly witnesses drug-smuggling attempts.

Just this week, CBP officers at the Brownsville Port of Entry intercepted suspected narcotics, combined to have an estimated street value of US$1.3 million ($1.6 million), in three separate enforcement actions. Those confiscations involved both cocaine and methamphetamine.

Cannabis is also a frequent subject of CBP seizures.

Last week, agents with the Rio Grande Valley Border Patrol agents confiscated more than 945 pounds (429 kilograms) of cannabis during two separate seizures. In one incident, a wannabe weed smuggler was left swimming across the Rio Grande River, sans cannabis, after rafting a Ford Ranger jammed with 565 pounds (256 kg) of drugs from